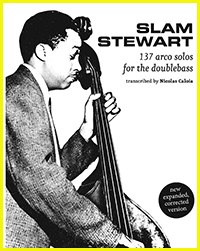 Nicolas Caloia is a Montreal based double bassist, composer, bandleader and the artistic director of the production company Musique rayonnante. For the past thirty years he has worked at creating a living music by using rigorously composed material to channel collective improvisation. The goal is a music that erases the lines between improvised and composed, pop and avant-garde, good and bad. Caloia has been commissioned to compose works for the Quatuor Bozzini (2019), the GGRIL (2017), Productions Super Musique (2012), and the Festival International de Musique actuelle de Victoriaville (FIMAV) (2011). As bass player and bandleader Caloia’s music can be heard in ongoing collaborations with Tristan Honsinger, Joe McPhee, Matana Roberts, Lori Freedman, Malcolm Goldstein, Sam Shalabi, Jean Derome, Joshua Zubot and Yves Charuest among many others. Past projects have included collaborations with Roscoe Mitchell, Marshall Allen, Steve Lacy, Hassan Hakmoun, William Parker, and Pandit Hariprasad Chaurasia. As a recording artist, Caloia has a dozen releases under his own name or in shared billing with others, and has as many credits as a sideman. His concerts and recordings have been critically acclaimed both at home and abroad.

Currently, the majority of his work as a composer finds a voice in the Ratchet Orchestra, a large group that includes many of the top improvising musicians in Montreal. The group has recorded four CDs: a self-produced live album in 2007; a Juno nominated studio recording put out by Drip Audio in 2011; a 2015, Mode Records release which features compositions by violinist Malcolm Goldstein; and a fourth CD which was released in March 2019 on the Ambiances Magnétiques label. The Ratchet Orchestra have performed at the Suoni per il Popolo festival (2008 and 2013), the Off Jazz Festival (2014, 2018), the Guelph Jazz Festival (2010), and at FIMAV (2011, 2014).

In addition to the Ratchet Orchestra, Caloia has put together “In the Sea”, an improvising string trio with violinist Joshua Zubot and cellist Tristan Honsinger. To date, they have toured Europe and the United States and have produced three albums, including a 2015 release on the Astral Spirits label, and a May 2017 CD on Relative Pitch Records. In the wake of a European tour, “In the Sea” recorded a third session engineered by Martin Siewert in Vienna which is currently being prepared for release by the Portuguese label Creative Sources. Caloia often creates, tours, and performs in duos with Kim Zombik (the project Silvervest has recorded a new CD, "people's waterworks" during the Covid-19 pandemic) or with Lori Freedman, and Yves Charuest and also in the collective ensemble “Now and Then,” a group that invites different guests to explore the relationships and tensions between composition and improvisation.